Hello to all our readers.  We have some exciting news to share.  Plant by Design Native Nursery has officially launched and will begin selling plants in early April.  Check out our website to learn more and keep up

with our upcoming events!

Thank you to everyone for your continued support and for helping us make this possible.

Last month we explained the important relationship between Milkweed (Asclepias spp.) and late summer blooming plants such as Joe Pye Weed (Eutrochium/Eupatorium spp.).  Just to reinforce the importance of correct plant pairings we would like to share the results of an area we planted this year for the Monarchs.

For this test we used the two most common types of Milkweed found at garden centers (Asclepias tuberosa & incarnata).  During the month of August over 50 Monarch caterpillars were counted!  Multiple chrysalis were found and many mature butterflies were spotted

collecting pollen.  Out of the two varieties of Asclepias used, Swamp Milkweed (Asc. incarnata) was by far the favorite.  In fact we never once saw a monarch caterpillar on the tuberosa species.  For nectar sources we planted many Eutrochium and Eupatorium species as well as other summer and fall blooming perennials.  As is apparent in nature, diversity is the key!  More variation in bloom times, positively correlates to more Monarchs having the necessary energy needed to survive the long trip back to Mexico. 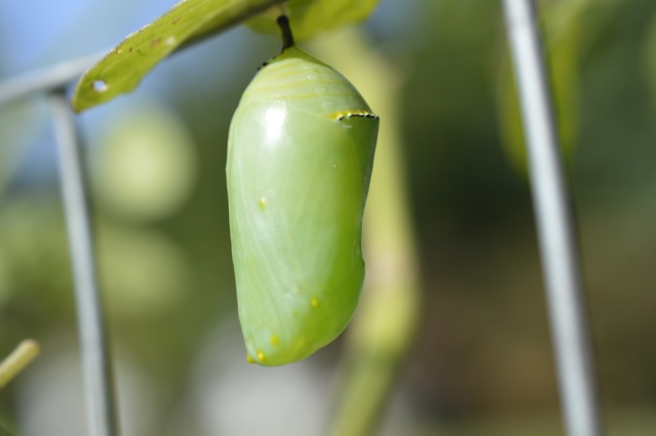 It is now early September and I am still finding Monarch caterpillars on the Swamp Milkweed.  As the Joe Pye weed and other mid to late summer perennials wind down, what can be planted to still provide these late bloomers the energy needed to make the trip?  Two perennials immediately come to mind.  Asters and Goldenrod!  For Septembers plant of the month we will focus on Goldenrod (Solidago spp.)

Solidago is a late summer/fall blooming perennial in the aster family (Asteraceae).  The hundreds of species and cultivars range in size from less than a foot to over 6 feet tall.  They sport small vivid yellow blooms that mass together to create a beautiful show.  All pollinators benefit from golden rod during early fall due to the decline in other flowering plants.  While being so important they are not commonly planted in residential settings.  Two misconceptions that likely have led to this lack of use is that Goldenrod causes Hay Fever (which it doesn’t) and that they are just too weedy to have a place in a maintained garden (which it isn’t).  In cultivation, Solidago spp. are excellent additions to any garden.  Here are a few varieties that you can try:

So give Goldenrod a try this fall and let us know if you like it as much as we do.

This month we chose to feature two plants because they have a special relationship when it comes to Monarch Butterflies.  Monarchs are the most well known butterfly as a result of all the work that has been done to combat their population decline.  Thanks to these efforts most people know that Monarchs need milkweed (Asclepias var.) in order to survive. 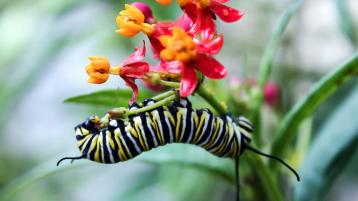 It is their host plant and must be present for the adult butterflies to lay eggs.  Due to herbicides being used in the crop industry, as well as land clearing, milkweed is not as abundant as it use to be.  Because of this it is very important for everybody to plant a patch or two of milkweed in their yards (Plant at least two different varieties).

Planting milkweed is well and good but it’s not enough.  What many don’t think about is that the adult Monarchs need a nectar source to build up the energy to lay eggs as well as to migrate later in the season.  If the only flowering native plants you have in your yard are milkweed than there is a good chance you won’t end up with monarch caterpillars.  Adults will be looking for a combination of nectar sources as well as varieties of asclepias.  So what’s the best perennial to serve this purpose?  Joe Pye Weed!

Joe Pye weed (Eutrochium var.) just might be our favorite perennial here at Plant by Design.  In early spring the leaves emerge and slowly grow until the summer heat hits.  Once this happens the purple stems explode to a height of 5 to 8′ tall!  Their purpleish pink clusters of flowers will often reach over a foot wide.  It would be hard to find a plant during the months of July and August that pollinators like more.  From dawn to dusk it is covered in different species of bees butterflies and moths.

This is why it’s so important to plant it alongside milkweed.  The Monarchs flock to the Joepye weed and then lay their eggs on nearby milkweed.  After the caterpillar forms its chrysalis and emerges it will have an immediate high quality source of nectar available.  This allows them to build up the energy needed to migrate back to Mexico and start the process all over.